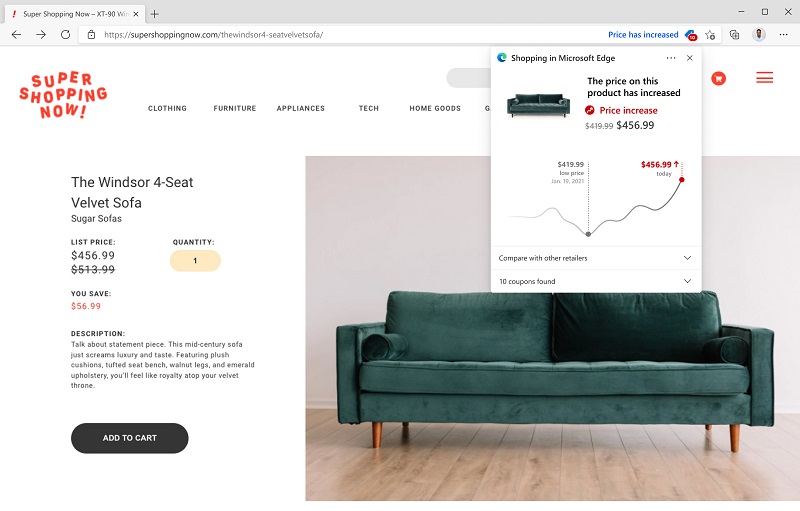 If you’re shopping for the holidays and you have Windows 11, you have some great tools at hand to help from getting overwhelmed. Through Microsoft Edge – the personal shopping assistance you always wanted – you can more easily find what you’re looking for, compare prices [1], apply coupons [2] and end up with savings that could add up significantly. The browser’s latest features can also keep your information safer online and help you spend with confidence.

Organize links to product pages into Collections to make it easier to shop for certain people or projects (like redecorating a bedroom). Plus now, Microsoft Edge is taking a more proactive approach, by automatically keeping tabs on products you’ve recently viewed and alerting you of price changes. You don’t have to check back on each product, which is especially helpful during this busy time.

Microsoft Edge includes built-in autofill coupons, introduced a year ago to help you save time and money while shopping online. To help you plan future buys, you’ll now find historical trends of prices on products, easy access to expert reviews and customer ratings, and a more streamlined guest checkout process.

And thanks to Autofill – which already stores and fills in your passwords through your Microsoft account – you can also count on it to store addresses and payment info, saving you time in filling out those shipping and billing forms when you buy something online. If you haven’t already synced your autofill data on your mobile device, open the Microsoft Authenticator app, go to the Passwords tab and start syncing your data.

If you use your smartphone to shop, good news: You can find many of these shopping features on the Microsoft Edge mobile app for iOS and Android, such as built-in coupons, price comparisons and price history [3].

Online safety remains a top priority. Already, you can secure password information with features like the password health dashboard and Password Monitor. With these tools, you can keep an eye on any potential leaked credentials and make sure that the passwords you’re setting are strong. (One helpful tip: Try not to use the same password on multiple sites.)

A recent update makes it easier to update your passwords with just one click if any of your saved credentials become compromised. Simply navigate to the Settings/Passwords page within Microsoft Edge and click on Change right next to the credentials you’d like to update. You’ll go directly to the change password page of the account in question. If you’ve run out of ideas for a good one, Microsoft Edge can generate a new, strong password for you and monitor it on your behalf.

[1] Available in the U.S., Great Britain and Canada.

[2] Available in the U.S., Great Britain, Canada and Australia.

[3] Price comparisons and price history are only available on Android.

Use intelligence to transform routing of service delivery requests 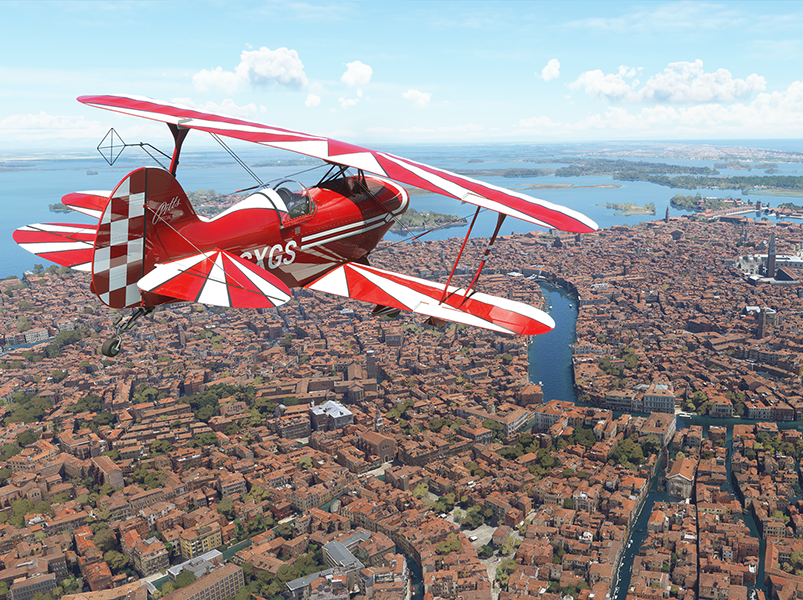 Italy and Malta come alive with rich detail of the region’s grandeur in the latest free World Update of Microsoft Flight Simulator.

“Fly throughout the historic cities of Rome and Venice, soar above Mediterranean coastlines and navigate sheer-faced peaks, all rendered in lifelike realism with World Update IX: Italy & Malta,” writes Jorg Neumann, Head of Microsoft Flight Simulator, in a post on Xbox Wire. “The Microsoft Flight Simulator team has refined this area with the latest geospatial data available, including digital elevation modeling, aerial and satellite imagery, and triangulated irregular network (TIN) modeling of 20 cities, including Rome, Naples, Venice and Milan.”

Head over to Xbox Wire for details and images from the update that is available now for free.

Hey Minecraft players: You can now download Angry Birds DLC on Minecraft Marketplace. “In this flappingly fantastic new world from the Oreville Studios and Rovio Entertainment, the pigs are up to their old tricks again, and it’s up to you to stop them,” writes Sophie Austin on Minecraft.net. “Playing as Red, your mission is to… 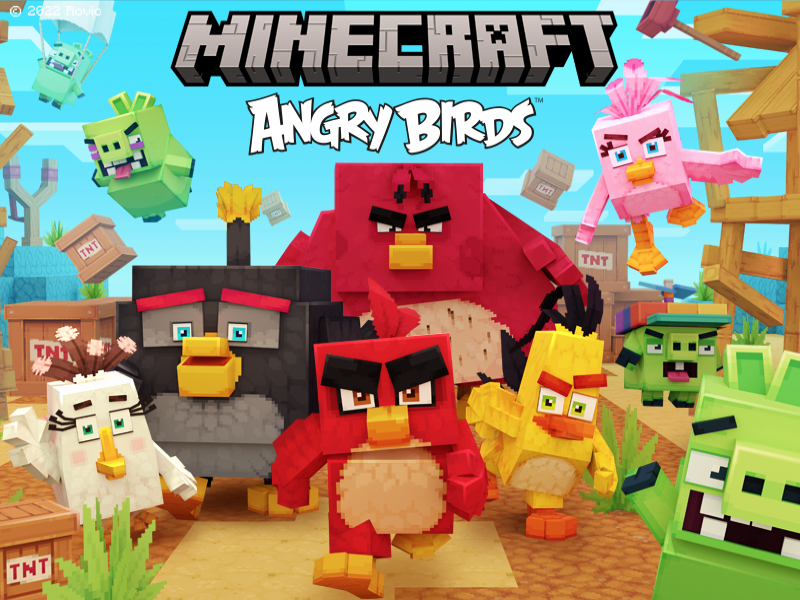 “In this flappingly fantastic new world from the Oreville Studios and Rovio Entertainment, the pigs are up to their old tricks again, and it’s up to you to stop them,” writes Sophie Austin on Minecraft.net. “Playing as Red, your mission is to rescue your birdnapped pals, save your precious eggs and thwart the pesky pigs’ grand plans. Battle your way through a uniquely blocky Cobalt Plateau, over the dangerous Piggy Junkyard, through Summer Madness and across Pig City to try and find your friends.”

With each rescued buddy, you’ll unlock them as playable characters so you can use the unique skills of Red, Chuck, Bomb, Stella and more to your advantage.

Visit Minecraft.net to find out more and check out lots of images.

ASUS has launched new Zenbook Pro and Zenbook S Windows 11 PCs, as well as a Strix SCAR special edition and Flow X16 through the Republic of Gamers (ROG). The Zenbook standard, convertible and dual-display laptops range in size from 13 inches to 17.3 inches, all with refreshed designs and the latest 12th Gen Intel… 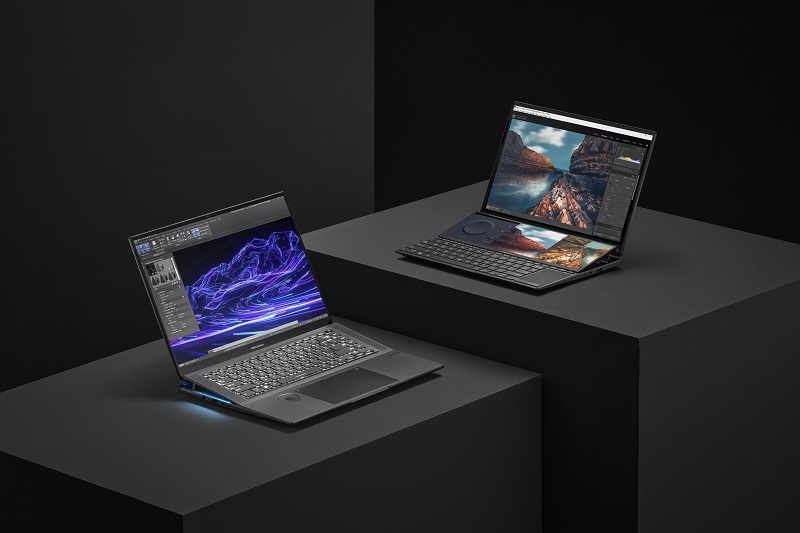 ASUS has launched new Zenbook Pro and Zenbook S Windows 11 PCs, as well as a Strix SCAR special edition and Flow X16 through the Republic of Gamers (ROG).

The Zenbook standard, convertible and dual-display laptops range in size from 13 inches to 17.3 inches, all with refreshed designs and the latest 12th Gen Intel Core H-Series processors or AMD Ryzen 6000 H-Series processors, along with an array of performance- and productivity-enhancing innovations. The Zenbook lineup comes with Windows Hello login through the PCs’ cameras and is Windows Ink capable through digital pens and touchscreens.

The flagship model in the new line-up is Zenbook Pro 16X OLED, a laptop made to foster on-the-go creativity. A 12th Gen Intel Core i9 12900H processor and an NVIDIA GeForce RTX 3060 GPU powers this PC within a 5.5-pound unibody that has been CNC-machined from super-tough aerospace-grade 6000-series aluminum alloy. And it’s just 0.65 inches slim.

These high-performance components need to be cooled effectively in order to reach their full potential. This starts with the new ASUS IceCool Pro cooling system, which uses two quiet IceBlades fans. These cool the vapor chamber, while hot air is vented efficiently to the exterior via the new AAS Ultra mechanism that also tilts the keyboard by an ergonomic seven degrees. The result is that the CPU and GPU can run at up to a 140 W combined TDP in Performance mode without throttling and can run quieter than 40 dB in Standard mode. The high-capacity 96 Wh battery helps keep you going up to 10 hours to get through the most demanding workdays.

The new Zenbook Pro 14 Duo OLED is a compact dual-screen creator laptop with a 14.5-inch 2.8K 120 Hz OLED display. It features a bigger and brighter next-gen 12.7-inch ScreenPad Plus secondary touchscreen, combined with the AAS Ultra auto-tilting design that improves cooling and ergonomics.

On the play front, the Republic of Gamers (ROG) introduced the new 2022 ROG Strix SCAR 17 Special Edition. This upgraded Strix SCAR houses a custom vapor chamber, paired with Conductonaut Extreme liquid metal applied to both the CPU and GPU, to push its hardware further than ever before.

At CES 2022 in January, ROG introduced the 2022 Strix SCAR. For Computex 2022, the Strix SCAR 17 SE special edition variant comes with even more power under the hood. ROG engineered it for those who want a no-compromise, tournament-ready gaming machine.

The improvements start at the beating heart of the machine, powered by the brand-new Intel Core i9-12950HX, a 65W laptop CPU. It also has up to 64GB of blazing fast 4800MHz DDR5 RAM, PCIe Gen 4 storage in a RAID 0 array that leave loading times in the dust and a dedicated MUX Switch for peak gaming performance. Intel Wi-Fi 6E and a 2.5G ethernet port means gamers can confidently launch an online match from anywhere.

These high-end parts require powerful cooling to operate at peak performance – and that it has, thanks to ROG’s Intelligent Cooling innovations. ROG has used Thermal Grizzly’s liquid metal compound for the last three years, which reduces CPU temperatures by 10 degrees C compared to traditional thermal pastes. This year, ROG’s engineering team collaborated with Thermal Grizzly again to develop an even higher performance liquid metal formula called Conductonaut Extreme, which the SCAR 17 SE uses on both the CPU and GPU. Offering 5 degrees C lower temperatures than standard liquid metal thermal compound, this was the first step to unlocking the device’s true performance potential.

Republic of Gamers also revealed the new ROG Flow X16. This 16-inch thin and light laptop is powered by an AMD Ryzen 9 6900HS processor and an NVIDIA GeForce RTX 3070 Ti Laptop GPU, with support for the XG Mobile family of external GPUs, all while weighing 4.4 pounds. It features the flagship Nebula HDR Display, a QHD/165Hz Mini LED panel with 1100 nits of peak brightness and 100% DCI-P3 coverage. The new Frost Force Technology and Pulsar Heatsink powers three fans and a high density heatsink to keep performance high and temperatures low.

ROG has not sacrificed usability and upgradeability for this thin and light form factor. Both the DDR5 4800MHz memory and PCIe 4.0 SSD are accessible and upgradeable. The X16 supports up the 64GB of memory and comes with up to 2 TB of SSD storage. A second open M.2 slot makes it painless to drop in more storage for a scratch disk or larger game library.

As a member of the Flow family, portability and versatility were instrumental in the design of the X16. Featuring a full 360-degree hinge, gamers can transform their machine from a traditional clamshell laptop to utilize tent mode, maximizing airflow when using an external keyboard or gamepad. Or they can flip the display back into full tablet mode for more touch functionality.

This versatility also includes full support for the XG Mobile family of external GPUs. These compact enclosures house laptop variants of AMD and NVIDIA’s highest-performing discrete graphics chips, while being portable enough to carry in a backpack. These external GPUs also act as an I/O expansion hub, housing dedicated ethernet, USB-A, DisplayPort, HMDI 2.1 ports and an SD card reader. With a single connection, the X16 can be transformed into a full power battle station.